Who should control enterprise social technology in the organisation, IT or HR? This is an interesting problem because it isn’t so clear cut and because HR may not realise this should be on their radar.

HR is ultimately responsible for selecting and running the HRMS system used in an organisation. IT needs to be heavily involved in the selection process and ongoing technical operation of the system to be sure, but I don’t think anyone would say the HRMS is predominantly the domain of anyone other than HR.

Likewise, IT is responsible for key technologies such as email and productivity applications. It’s unlikely HR would be consulted on these systems in any organisation.

But what about social technology? Where does it fit?

Arguments for IT controlling social technology

So who should it be? 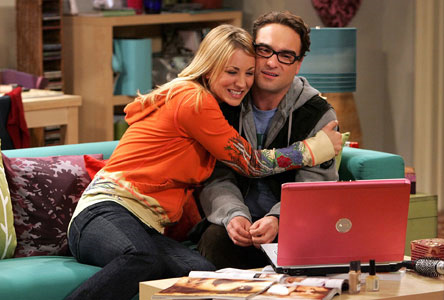 The answer I believe is that this requires the marriage of two of the most unlikely partners. Both IT and HR need to work together to make social tech successful in the organisation. A bit like Leonard and Penny on The Big Bang Theory.

Opposites attract, like Leonard and Penny. Opposites can complement each other’s skill sets. Just look at the pairing of Steve Jobs and Steve Wozniak.

HR and IT have a long future together as social tech develops and evolves over the next decade. But HR needs to realise now that they need to be part of this.

We have been using our own enterprise social technology internally now for some time.  I’d like to share just one of the many experiences.  In part I’m doing this to help illustrate the benefit of enterprise social technology.  It helps answer the question of why someone would want to use it.  I’m also sharing the experience to shed some light on the technology for those who are wondering what it’s all about. 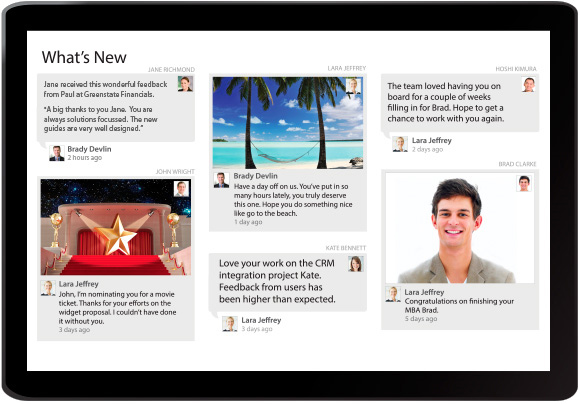 There are a myriad of uses for social tech in the organisation … this is just one.

A wall or news feed makes so much sense.  We are social beings, we operate under social constructs.  It helps to be able to see things that are happening across a group or wider group.  Having used our wall quite a bit I couldn’t go back to pre-wall.  For example, one of the uses of the Wall is to recognise others.  As a manager I find this one of the most powerful and positive tools in my kit bag.  When someone does something that deserves recognition, it’s wonderful to be able to put a thank you note on a wall so others can see.  And it’s such a buzz when you see team members giving each other recognition.

There’s some legitimate concerns that people may have about this though.  They are reasonable concerns and need to be addressed.  The three key ones are:

The potential to waste time

You may wonder whether a wall creates a social love fest.  A frenzy of recognition and other posts.  It doesn’t.  It’s rare to see the same person giving recognition more than once a fortnight.  My experience is that recognition has been given sparingly, where it deserved to be.  If it were given for even the slightest thing, for the sake of it, I believe it would quickly lose its benefit.

The wall hasn’t magically created a perfect working world.  Not every situation and person that truly deserved some recognition, received it.  I think the truth is that people are just busy working and don’t always think to do it.  But there is more recognition, a lot more.  And it’s much more visible.

When many HR people think of social tech, they are probably thinking of sites like Facebook and Twitter.  Let’s face it, we’ve all read news stories about their inappropriate use.

The question is whether we should sacrifice the benefits of enterprise social technology to protect our organisations against potential misuse.  My experience is that I haven’t seen any misuse at all.  But I’ve read the news stories like everyone else and I know it can and will happen.  So do we avoid social tech?  I believe that would be crazy.  That would be like saying no to the introduction of computers into the organisation in the 80s and 90s because of their potential for misuse.

The real question should be how can we minimise the possibility of misuse and protect people from it.  The answer is that people, managers and HR should be given control over information sharing and visibility.  And of course, appropriate policies are needed.  But those policies are needed now regardless of whether you have enterprise social technology.

It’s counterintuitive, but I believe enterprise social technology helps protect organisations and their people.  This is better explained by pointing out what happens if an organisation doesn’t implement social tech.  People will eventually find their own social solutions which organisations won’t have any control over.

From a leadership perspective face to face conversations are the shiznit.  Great progress has been made in recent years getting leaders to have one-on-one conversations.  Anything that threatens to undo all this progress is going to be received with some caution. 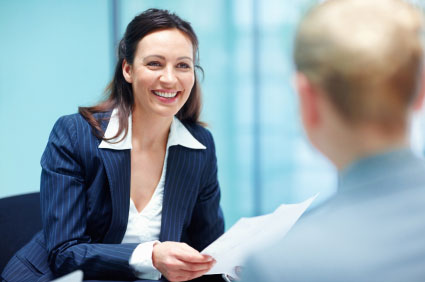 So does a wall replace face to face interactions?  No it doesn’t.  It enhances them and makes new things possible.  Here’s three ways it does this.

If you’re a manager, ask yourself how often you see team members recognising other team members in front of others.  It happens, but infrequently.  To make things worse, you most likely won’t be there in the moment it happens.  You probably won’t hear about it.  The wall improves both of these problems.  For reasons explained below, recognition is more frequent.  Everyone doesn’t have to be there in the moment either.  If you aren’t there, you’ll still see it, you won’t miss out.

How does a wall increase the frequency of recognition?  The answer is something called the gift economy.  In short it means this.  Joe gives recognition to Sally.  This makes Sally more likely to recognise Joe some time down the track when he deserves it.  In my experience it also makes it more likely that Sally will think to recognise someone else.

The wall also gives people a greater reach.  Visibility is not just restricted to one or two people.  Recognition is not just heard by those in the verbal vicinity.  People across a wider group get to see things they previously couldn’t.

A couple of posts ago I wrote about the new world of work and the need for HR to be part of the change.  I’d love to hear your thoughts on enterprise social technology.

Organisations can be tyrannical places in a sense.  Very different to the world we live in outside work.  In the morning we arrive at work and step into an older hierarchical world.  At the end of the day we leave work and step back into our democratic lives – for those of us who live in a democracy.  But are we on the brink of a new world of work?

Tyranny is a pretty strong word.  I’m certainly not using it in the same sense experienced by many people in the world who still suffer under tyrannical rule and have little if any freedom.  I mean the way that some managers can exercise power or control within the organisation.  There’s an old world nature about it.  Organisations can be very hierarchical, bureaucratic and pretty dreary for many.

Managers are in positions of power.  They can hire and fire.  Anyone beneath a manager in the hierarchy is subordinate to that person.  The manager can control that person (to an extent).  This is necessary to organise a group of people to achieve something, but the question is a degree of control versus lead.

I believe a new type of workplace is emerging.  You can see it in the tech startups for example. Their people are more like partners in a sense.  The culture of equity in these organisations is testament to this.  A local example is Shoes of Prey.  It only takes a little familiarity with their blog to understand that working at Shoes of Prey is different.

In the new world of work organisations rely less on hierarchical power and more on leadership and partnership.  This change has been happening for some time now to be sure.  Picture work now compared to the 50s for example.  The big difference though is that in the new world people may still need to be organised to achieve things, but by having more visibility and understanding for what each is doing, they need less control.  They can have more autonomy in the way about which they achieve things.  People can be more like collaborators.  Technology is making this possible.

Step into a government department and you might wonder if this new world could ever possibly happen though.  They can be the very embodiment of bureaucracy and control.  Is the new world a possibility for all or just for those who work in the likes of the tech startup?  Some days I think this is possible, some days not.

History gives us some hope though.  This sort of thing has happened in the past.  There are a number of examples, but perhaps one stands out amongst the others.  In the 6th century BCE, the Greeks brought about a new world with democracy. At the time you could have been forgiven for thinking this not possible – the Athenians lived under tyrannical rule.  So how did it happen?  Was it high minded thinking by great individuals?  Will it take this sort of effort to bring about a new world of work and can this happen now?

The answer is that democracy and the new world came about in part because one man named Cleisthenes saw an opportunity to gain power over rivals by giving the people rights and a say in things.  He may have been high minded as well, but the point is that this isn’t a requirement.  To say that the people gravitated towards Cleisthenes is an understatement.

In our day, organisations like the tech startups and others are our Cleisthenes.  If talented people gravitate towards new world organisations, which they surely are, great change can occur.

How long can the old world organisations last, if talent gravitates towards the places where they can be their best?

For our part, we want to help make the new world possible in 2013.